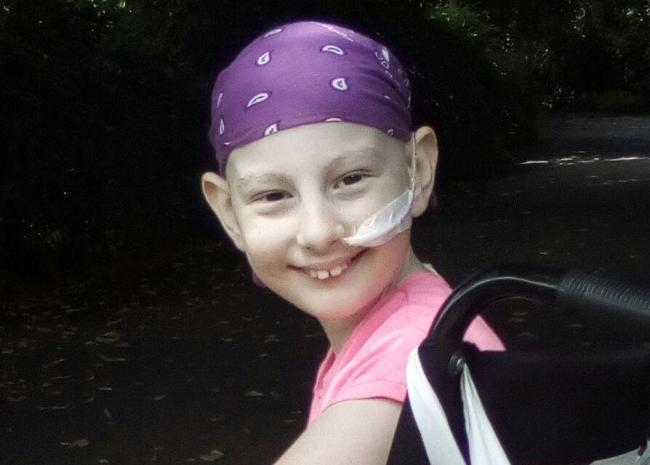 TWO supermarket giants went head-to-head to help raise money so that a nine-year-old with leukaemia can go to Disneyworld in Florida.

Staff from Minehead‘s Morrisons and Tesco‘s stores played out a thrilling 4-4 game in front of a large crowd at Minehead Recreation Ground on Sunday, with Morrisons winning 4-3 on penalties.

One of the staff at Morrisons is Leon For from Minehead, whose nine-year-old daughter Abigail has been undergoing chemotherapy, treatment which is expected to last two years.

“It all came to light after we noticed a lump on Abi’s neck and collar bone,” Leon explained.

“We took her to the doctors’ in January, but initially they thought it was just a virus.

“However over the next month or so the lump grew bigger and was more firm, and when we went to get her checked out again in March, we were sent straight to Musgrove.”

An MRI scan revealed Abi had leukaemia, which Leon says was ‘quite a shock to the family to say the least’.

Leon said the team at Morrisons had been ‘amazing since day one’.

Over the past five months, a number of staff had charity head shaves, there have been collection buckets and a raffle organised with prizes including a camping trip to Crealy, as well as the football match at the weekend.

Overall Leon believes they have raised around £3,000 which has helped with transport costs to and from Bristol for treatment, and it is hoped when Abi is better it will fund a trip to Disneyworld in Florida for the family.

“It is humbling to know you work with people who will help you in your time of need,” Leon said.

“They have been fantastic with fundraising and I really want to thank them.

“All the support has meant the world to us.”

Leon describes Abi as a ‘really sweet girl’ who cares greatly for her friends and family, which includes mum Vicky and brother Ryan, aged 4.

“She is passionate about dancing but unfortunately that is on hold at the moment,” Leon said.

“She is a member of the Manda Clarke Dance School and enjoys ballet, tap and musical theatre.”