Should parents bank stem cells from their baby’s umbilical cord? 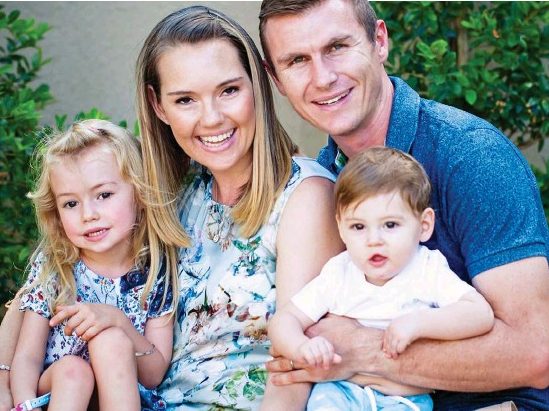 ‘BEST INVESTMENT EVER’: Paige, left, with her parents Carla and Kyle Poppleton and little brother Tyler

Wrecked a major organ? There’s no transplant waiting list, as a new one can simply be grown in a lab.

Cancer has become a minor annoyance, Alzheimer’s can be stopped before it begins, the blind can see again and there’s a limitless supply of blood in tanks at every hospital. It may seem like science fiction. But in fact, all of the above have extraordinary potential which is currently being explored in the world’s laboratories.

Today we look at the growing phenomenon of families who are choosing to store stem-cell-rich umbilical-cord blood in special ‘ bio- banks’ as an investment in their children’s future health.

The hope is that the process could one day provide a cure for a range of medical conditions – and might help not just the child but other family members.

Yet critics argue that, as the science that allows the use of these cells in treatments is still in its infancy, it may simply be an expensive gamble.

So what is the truth? Professor Sir Robert Lechler, president of the Academy of Medical Sciences, says it is important not to overstate the outcomes of stem-cell research, much of which remains at an extremely early stage.

But he describes the possibilities as ‘exciting’.

Prof Lechler said: ‘ We must always separate evidence- based science from misleading claims from clinics outside the UK about the potential of stem cells to cure untreatable diseases. However, decades of study has allowed us to glimpse the potential.’

Six private cord blood banks are licensed by the Human Tissue Authority to store stem cells from umbilical cords and placentas, a rich source of the regenerative cells, and store them in liquid nitrogen for upwards of 20 years.

It is also possible for mothers giving birth at some UK hospitals to donate cord blood to a public stem- cell bank – the NHS Cord Blood Bank – run in conjunction with British charity the Anthony Nolan Trust.

Thanks to this bank, patients with blood cancers such as leukaemia – often children – get lifesaving stem-cell transplants if they are found to be a suitable match.

The charity Leukaemia & Myeloma Research UK also funds its own Model Cell Biobank. This free service stores cord blood for eligible families: those in receipt of benefits who also have a family history of cancer or other conditions where there is a proven treatment involving stem cells.

Private banks are distinct from NHS or charity-run cord blood banks, as the banked cells are stored only for the patient’s personal use.

Private storage in the UK is proving so popular that Cells4Life, the country’s biggest bank with 110,000 samples – 50 per cent of the UK market – recently announced it was expanding to cope with demand.

Dr Ann Smith, scientific director of Smart Cells, another bank, said: ‘ We have around 50,000 stored samples of cord blood stem cells and also cord tissue, which contains a different type of stem cell, and have released 20 of these samples so far to be used for children with blood cancer, and also in experimental treatments for cerebral palsy and autism.’

However, a major drawback is that cord blood does not contain enough stem cells to treat an adult – just a child – which means, at the moment, they are really only useful for a limited period.

But that does not mean that banking cord blood is a waste of time.

Professor Brendon Noble, chief scientific officer of the UK Stem Cell Foundation, which funds research, said: ‘ Stem- cell banks have had some success, but in the near future, you may not need to harvest umbilical cords if we can create stem cells from adult cells – one promising direction of research. Maybe one of these days stem cell banking will be obsolete.’

Read the full article from The Mail on Sunday here